"While I watched McClain play in the studio, waves of sound—warm and reassuring—washed over me; their undertow pulled me closer, figuratively, to the instrument, and drew me into the heaving sighs of the music."   -Derk Richardson, KPFA Radio

Joshua McClain wields his cello like a man possessed. Loud clubs quiet down to barely a whisper -  his concerts are astonishingly intense and emotionally transformative. Mixing orchestral, avant-garde, rock, Americana, and genres not yet defined, Joshua's shows will change your perspective on what's possible with a single cello.

Guided by the voice of the cello, Joshua McClain's Rock Cello Odyssey, takes audiences on a supernatural, mythological voyage; a descent into the Underworld and back again, bearing the fruits of rebirth.

Based out of Oakland, CA Joshua is best known for his unbridled solo cello performances. Regarded as one of the top artists in the San Francisco Bay Area, McClain was voted Musician of the Year in San Francisco at the Raw Artist RAWAwards showcase in 2013. Joshua has toured and performed extensively in North America as well as Germany, France, Japan, West Africa, and Argentina. 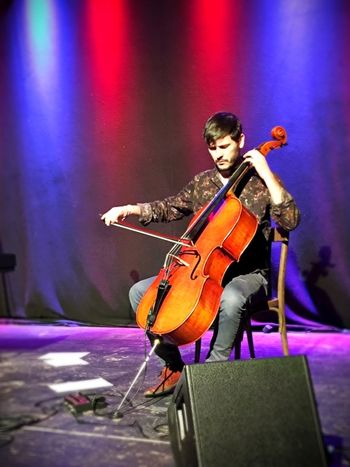 By donating to Trails & Vistas you're supporting the arts and helping to bring immersive
experiences in creativity for local students and communities.